Instantly determine the ethanol concentration is your fermenting wine.

Use with GOFermentor NET, JR, or stand-alone version for carboys/small tanks.

Determining alcohol concentration in fermenting wine is the holy grail of the winemaker. In addition to determining when the sugar is depleted, knowing the rate of ethanol production can provide insight into whether the fermentation is “stuck”, complete, or progressing normally. While ethanol can be measured – all methods require removing a sample and performing an analysis. Refractive index measurement is inexpensive, but requires careful compensation. Other offline methods include tedious enzymatic methods, distillation, ebulliometry, or expensive FTIR instruments.

The new GOvent device From GOfermentor uses mass flow gas sensors to measure gas flowrate. It the past, these devices were too expensive for winemaking use, but the COVID pandemic led to development of inexpensive sensors for ventilator monitoring. We have adapted these devices to reliably, and inexpensively measure vent gas flow. GOvent makes real-time ethanol estimation affordable for the hobby, or small commercial winemaker.

CO2 offgas volume was measured using the GOvent sensor. Predicted ethanol was calculated using the previous equations and then plotted versus the measured sample ethanol concentration. The relationship is linear as predicted by stoichiometry, and the regression R2 is better than 0.99. Typical plots are shown in the figures below: 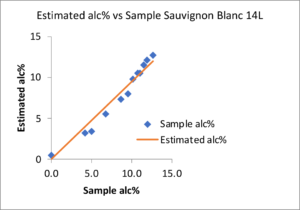 Here is another dataset from a Merlot fermentation performed in GOfermentorNET. It was run at maximum capacity of 1 ton of grapes (approx. 1100 liters of must). The fermentation lasted just over 14 days. A cumulative 25,000 liters of CO2 was evolved and the trend in time is shown in the above figure. Note that monitoring the CO2 profile is very helpful is understanding the lag in the beginning and then the rapid fermentation, followed by the eventual flattening as all the sugar is consumed. It is easy to identify a “stuck” fermentation.

Ethanol was estimated automatically in real-time from the CO2 data and is shown below. The orange line is the estimated ethanol concentration. Samples were taken and assayed daily. These measurements are shown as blue dots. The predicted values are within +/- 0.25 %v/v proving the utility of the GOvent estimation system 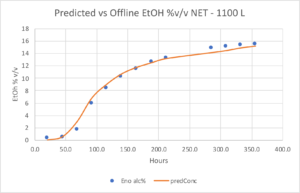 The GOvent NET replaces the original vent valve with a vent valve with internal gas flow sensing. Any gas (CO2) from the liner can only be released through the vent valve. The volume of CO2 released (compensated for temperature, pressure, and humidity) is measured continuously. Cumulative gas volume measurements are transmitted to the NET controller and displayed on the control screen. The estimated ethanol production and concentration in the liner can be viewed on the free GOfermentor internet NET app (android or ios). 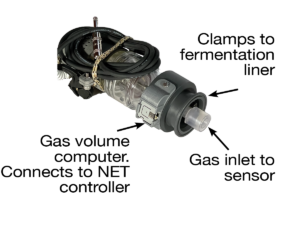 GOfermentor Jr has a pressure-sensitive vent valve that releases gas whenever the pressure in the liner exceeds 0.1 psig. The GOvent option replaces this valve with one with an integral gas flow sensor. A cable connects the new sensor-equipped valve to the JR controller unit. The JR controller screen shows the cumulative volume of gas vented, and the free internet JR app shows the ethanol produced and concentration in the fermentor.

New JR devices can be ordered with gas measuring vent instead of the standard vent. Older units (prior to 2022) can be retrofitted. Please contact tech@GOfermentor.com. 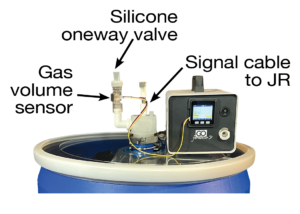 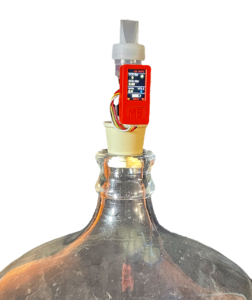 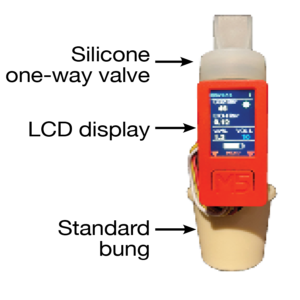 The GOvent can be used with closed carboys and small tanks (< 250 liter). Exchange your old bubbler or water trap with our silicone check valve vent. No water to fill – no worries of contamination, or the trap drying out. An integral flow sensor with full color LCD display shows the cumulative CO2 generated and the estimated ethanol concentration in real time.

Can be used for wine, beer, mead, and other fermentations. Only requirement is the fermenter vessel must be closed so that any evolved CO2 is vented through the GOvent sensor.

Remote access over the internet is available using the optional Android or ios app. Monitor your fermentation across the room or from across the world.

The Widow Clicquot: The Story of a Champagne Empire and the Woman Who Ruled It, by Tilar Mazzeo